Posted on September 4, 2010 by Johnathan Richards

There is an expression that the church is always one generation away from extinction. It’s simply because the youth of today are the leaders of tomorrow. 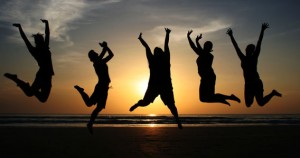 With this truth in mind it should be self-evident that churches ought to take seriously their commitment to ministry to the youth, to teenagers.  If the youth are the church of tomorrow then they need to be a priority in the church today.  Some people are at times hesitant to believe they could minister effectively to teens.  Or others conclude that teenagers have no interest in the things of God, they only think about movie stars, the latest musical sensation or their wardrobe.  Perhaps we might even be inclined to ask, “What real value can they be to the church of today?”  What we will find is that the church that takes care of their teenagers today, and values them, will be rewarded now and in the future.

Some people believe that they are not “cut out to minister to teenagers.”  Churches may be quick to think that what they really need to do is hire a youth minister who can do this for them.

A large church once hired two young, cutting edge, hip youth ministry interns.  They had the haircuts, the latest technology gadgets, the whole nine. Each Friday morning the church opened the doors to feed breakfast to any teenager that would come, followed by a devotional time before school began. At first the teenagers flocked around the young 20’s guys.  Little by little someone in the kitchen began to get noticed.  The volunteer who made the pancakes would engage any teen nearby and ask them how their week was or how their mom was doing whom he knew to be sick.  As this simple cook demonstrated care and concern for the teens, they began to flock to him morning after morning.  By the end of the school semester, few teens hung around the cool youth interns.  The cook shared his heart, their burdens and lots of pancakes.  You may feel that you have nothing in common, maybe you don’t, except a common humanity that needs God.

A prevailing notion today is that teenagers are not interested in church or the things of God.  No doubt there are those who don’t give church or God a second thought.  But there are those whose hearts God is drawing to himself.  They have begun to understand even now that all that glitters is not gold.  Many things in this world offer pleasure and escape but only One offers truth with which they can build their lives on.  As teenager I remember getting disgusted with the trappings of our culture and began to seek out godly adults who would answer, from the Bible, my tough questions and were diligent to seek out the answers they did not immediately have.  Often God used people of young ages in the Bible to carry out his will.  Mary, mother of our Lord, was but a teenager when she conceived.  David was only a young man when he became a giant slayer.  Samuel the prophet was only a young boy when God called him to minister in the Tabernacle.  God is working in the hearts of teenagers today.

Youth are important, and are the leaders of tomorrow. So make sure you create an environment which welcomes youth, and encourage them to live a good life.

Please click here for more details: http://www.abcfastdirectory.com/
View all posts by Johnathan Richards →
This entry was posted in Church Youth. Bookmark the permalink.